A shorebird with bling of a different kind 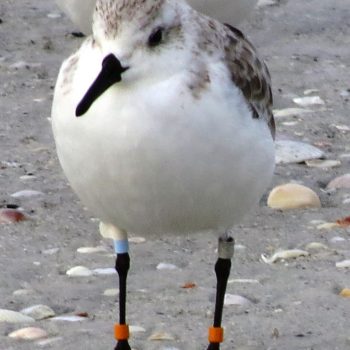 A sanderling banded in Saskatchewan is wintering in FL

On Oct. 18, 2015, while walking along the beach on Palm Island, Charlotte County FL, just south of Stump Pass, I noticed one tiny shorebird, a sanderling, that had bands on its legs. This bling was unusual since there were orange bands on both lower legs, a silver band on the upper left, and a blue band and blank white flag on the upper right leg. There is an on-line website (bandedbirds.org) that allows banded birds to be individually identified if they carry numbered flags, but this combination of bands without a lettered code was confusing.

I contacted the administrator of the website and eventually found that this bird was banded at Chaplin Lake, Saskatchewan, Canada, as a group or cohort of birds caught in the springs of 2012-2014. This bird was presumably headed to its breeding site in the high Arctic about 1200 miles away along the northern tundra of Canada when banded. It is now on the SW FL coast where it may spend the winter or head further south.

The direct line distance between Chaplin Lake and Palm Island is about 2000 miles. Chaplin Lake is unusual in that, like the Great Salt Lake in Utah, it is saline and produces large numbers of brine flies and fairy shrimp that are avidly consumed by vast numbers of migrating shorebirds.

So the sanderlings which scurry along the beaches in FL are remarkable hemispheric travelers which depend on the health of delicate natural habitats in different countries. They are tiny (about 2 oz) and their ability to make such a fantastic migratory journey of at least 6000 miles for each round trip over many years is almost beyond comprehension.