A Tale of Some Strange Marine Birds – The Alcids 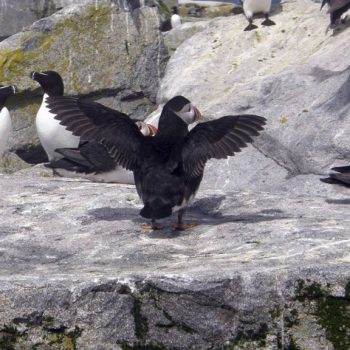 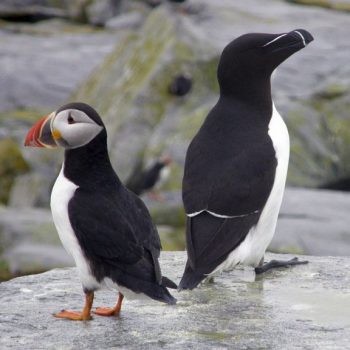 It is a considerable pleasure to visit unusual new places to compare their life forms with those we are familiar with. It does our brains good to be confronted with strange new shapes and colors and challenges us to evaluate new ideas and concepts about the nature of life. So in this vein we visited famous Machias Seal Island on a boat tour originating from Cutler, Maine, to see the wonderful breeding bird colonies. It seems clear why thousands of birds would choose to nest on such an isolated island to avoid predation by terrestrial animals; they are still subject to predation from their gull enemies.

The three main breeding inhabitants of this island were all types of auks or alcids. These remarkable marine or pelagic birds only come to land to breed. Their natural history is amazing, and presumably only the inability of any birds to have live birth have prevented them from living at sea all year. So why is it that marine birds and turtles must lay their eggs on land, yet many sea snakes give birth to live young at sea?

These small birds feed on fish or invertebrates which they catch by “flying” underwater. In other words they flap their wings to swim, unlike cormorants, mergansers, and loons which swim with their feet. If their appearance and habits remind you of penguins only found in the southern oceans, then you would be right in that these are the northern ecological equivalent of penguins. Yet the penguins are all flightless, allowing them to be larger than the alcids. Penguins also “fly” under water using their vestigial wings and are probably much more efficient swimmers since their wings modified into flippers do not have to function in aerial flight. How the alcids are able to use their wings for both swimming and for flight in air is amazing (see photo of puffin wings); obviously this involves compromises which leads them to flap their stubby wings very rapidly and limits both their flight and swimming capabilities.

The three alcids on Machias Seal Island were the famous Atlantic puffin, the razorbill, and the common murre. These form a series of increasing body size from the puffin at less than one pound to the murre at about two pounds. The beaks are distinctly different in shape and color, although the bodies are generally black, brown and white. It seems impossible that these small birds could survive in such cold waters, yet they thrive. The remarkable diversity of forms and habits among the alcids and penguins illustrates not only the ability of life to conquer some of the most stringent conditions, but the similar yet distinctly different solutions that evolve in different regions of the earth.

Watching the somewhat comical puffins at close range from a blind made their achievements as a successful if tiny predator in extremely frigid northern waters seems almost an impossibility- yet there they are! These fascinating alcids seem to defy the odds in the way they have adapted to such a hostile environment. Long may they rule over their frosty kingdom!