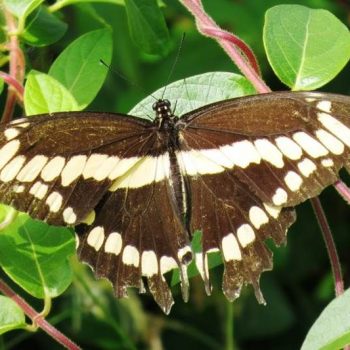 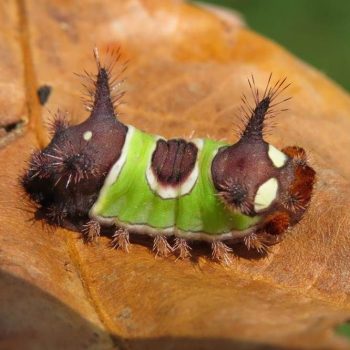 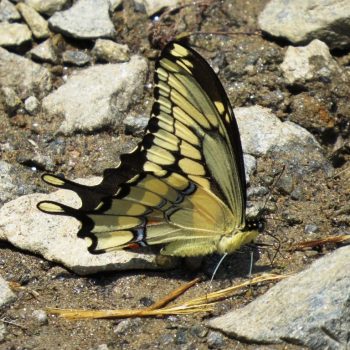 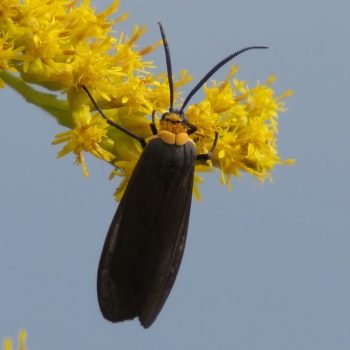 My nature excursions have been much curtailed lately since I had a knee replacement three weeks ago. Yet it is a tribute to the profligate life of fall that I have been able to enjoy a wide variety of creatures even within a short distance of our house. Many of these are animals that are widely distributed in the eastern US and represent some amazing examples of animal adaptations.

The saddleback slug caterpillar is a strikingly colored example of warning to predators not to mess with this potentially tasty tidbit with many stinging spines. It is considered to deliver one of the most potent stings of any caterpillar. It is interesting that the warning coloration is an unusual green saddle with a possible eye spot on the back. Then there are two smaller eye spots on the posterior end of the body which might direct the strike of any foolish bird to a less vulnerable area.

Another remarkable example of warning coloration is the yellow collared scape moth, a type of day flying tiger moth, which apparently is a Batesian wasp mimic without any distastefulness or toxin. It strongly resembles some wasps which have a very potent defense in their sting, and this allows it to forage during the daytime, unlike most other moths.

The largest of the eastern swallowtail butterflies, the giant, is common in Florida but much less commonly seen to the north. I was very fortunate to see one in our VA yard which was heavily worn and showed signs of bird attacks on the posterior hind wings which are thought to mimic the head and thus divert such attacks from the head and body. An individual seen earlier in the year is shown with the wings folded and shows the intact swallowtails on the hind wings. Such a beautiful butterfly feeds only on plants in the citrus family (Rutaceae), including the exotic orange tree in Florida, and thus is classified as a pest. A friend who grew up with a family orange grove used to spend much time as a youth in picking the orange dog caterpillars from the young orange trees and dropping them in oil.

Spiders are commonly seen in early fall when they build their webs everywhere and grow rapidly so that they can lay eggs before they are killed by frost. This female banded garden spider or argiope is sitting on its web above the distinctive zig zag stabilimentum, which might serve to protect the web from destruction by flying birds. The immense numbers of spiders present in meadows is mind boggling and is most obvious early in the morning when the webs are covered with dew.

This red eft was a very surprising find in our yard since it is the very highly toxic terrestrial stage of the aquatic red spotted newt. It warns all potential predators that it contains tetrodotoxin in its tissues which is lethal when ingested. Yet I can hold it in my hand without fear since the poison is entirely inside the body tissues. Various other salamanders mimic this eft by displaying similarly bright red/orange coloration.

So if you think of fall simply as the beginning of the end of the abundant life of summer, think again. It is a time of great biodiversity and there are often different species to be seen than earlier in the year.