Early Summer Flowers and Insects in the Blue Ridge 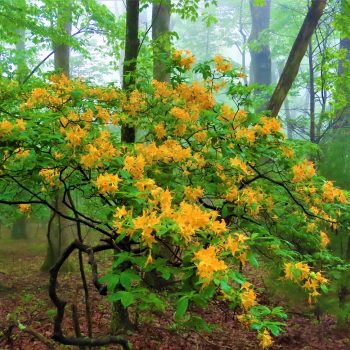 Flame azalea in the morning mist along the Blue Ridge Parkway 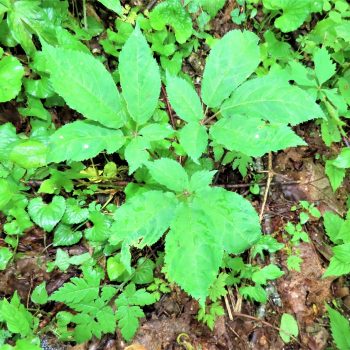 The fire pink flower is designed to attract hummingbird pollinators 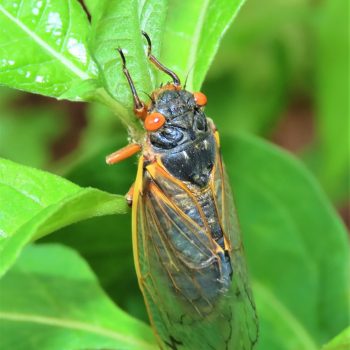 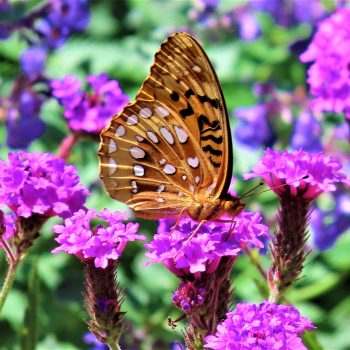 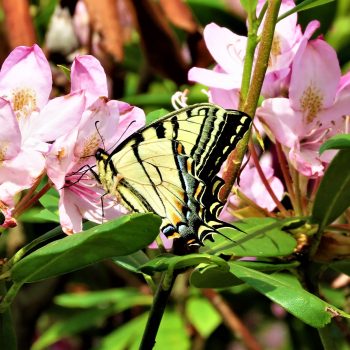 Once the famous early spring ephemeral flowers have finished blooming, there are still some spectacular flowers yet to come in late May and early June.  One of the most beautiful is the flame azalea (genus Rhododendron) which seem to be “burning” in the misty Appalachian hill forests.  They have long arching male stamens and even longer female styles to rub against the large pollinating butterflies, bumblebees and hummingbirds.
In contrast down on the forest floor there is a very inconspicuous plant in bud that  is highly sought after for its reputed but controversial therapeutic value, the ginseng or “sang.”  The root may somewhat resemble a human form and has thus become valued as a cure-all for various medical conditions.  Fortunately for the plant it is difficult to find until the red berries are formed and these are avidly eaten by birds such as thrushes (both residents and migrants) that feed on the forest floor.
A highly visible plant growing low to the ground is the brilliant fire pink.  It is a classic specialized hummingbird flower with bright red colors and a long tubular structure.
A true bug/Hemipteran I saw is the famous periodical cicada with red eyes.  These generally appear every 13 or 17 years in plague numbers in certain locations and the noise can be overwhelming.  The purpose of this unusual life cycle would seem to be to minimize predation or perhaps a disease.  The reasoning is that it would be impossible for a predator to specialize on a prey that only appears at such long intervals and in such numbers that it overwhelms the appetite.
Early summer signals the appearance of significant numbers of butterflies which is very exciting after a cold wet spring.  The large great spangled fritillary is impressive (here shown on the flowers of vervain/verbena in our yard).  A very similar sibling species the Aphrodite occurs at higher elevations.  Both feed on violets as caterpillars.
Another large showy butterfly which appears early is the pipevine swallowtail.  This is the famous toxic mimicry model for several other species which are predominantly black with metallic blue highlights and orange spots.  This butterfly feeds on the poisonous pipevine as a larva and retains toxins which protect it as an adult and advertises this fact by its striking coloration.  One of the tasty mimics is the dark morph female of the tiger swallowtail shown here nectaring on rhododendron flowers.  Strangely enough only some female tiger swallowtails are mimics whereas all males and many females are instead yellow and black (as the female shown here on rhododendron).  The story is even more complex since the appearance of the peculiar pipevine caterpillar is thought to be the evolutionary result of mimicry of a strange tropical invertebrate, the velvet worm.
By the end of May, avian breeding is in full swing or even over for some species.  But early summer is a very exciting time as the weather warms up and many more butterflies and insects of all kinds make their appearances.  If you follow the changing “phenology” or sequences of flowering of plants you will constantly be challenged to identify the new plants that coming into bloom.