A general view shows some open water but the lake is most;y covered with aquatic vegetation, a healthy sign

This willow “head” serves as a bird rookery

A great egret on the rookery demonstrates a remarkable breeding display 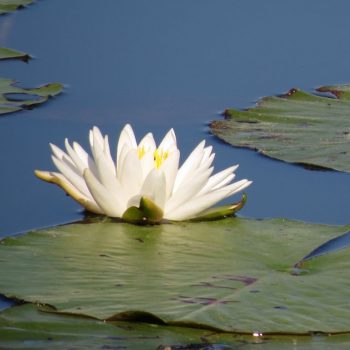 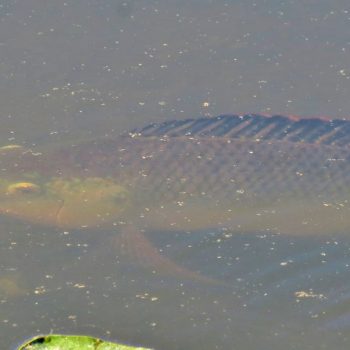 This large African tilapia is outcompeting gallinules and coots for food

While attending a Peace River Audubon Society field trip to  the campus of State College of Florida- Venice ( http://www.scf.edu/AboutSCF/Locations/SCFVenice/default.asp ), I was delighted to find that the lovely constructed lake just in front of the campus was well managed.  It had some open water but the majority of the water surface was covered with native aquatic plants (primarily spatterdock but with areas of  rushes, water lilies, sedges, cattails and willows).   Natural wetlands in Florida are usually shallow with the exception of sinkholes.  Since spatterdock is generally found in less than five feet of water, this lake simulates the natural condition better than most constructed lakes which can be 20-40 feet deep, with resulting low oxygen levels that limit animal habitat and cause fish kills.

Willows have been allowed to flourish in this lake, which provides not only roosting and feeding habitat, but there is a small bird rookery built primarily in tall willows.  Willow is also the food source for caterpillars of the viceroy butterfly.  Unfortunately willows in many managed wetlands are removed, to the detriment of biodiversity.  This rookery is quite close to shore, but despite this problem the resident alligators must be at least partially successful in protecting the young birds from predators such as raccoons.  I noticed great egrets giving breeding displays with their fantastic plumes.  Great blue herons and anhingas were also nesting in the willow rookery.

In one area of the lake water lilies replaced the spatterdock.  The flowers of water lilies are not only beautiful but are thought to represent one of the early stages of evolution of flowers; they are often pollinated by beetles, an indication they evolved before bees and butterflies were present.  An interesting bird, a purple gallinule, was feeding as it walked with its huge feet across the floating water lily leaves- it grasped the edge of a leaf with its beak, put its foot on the leaf to hold it, and looked for a tasty animal morsel underneath.

Tilapia, a large mainly herbivorous fish, was present and their nests were quite common along the edges of the lake.  Unfortunately this invasive African fish out-competes some birds such as common gallinules and coots for their primary food source, floating vegetation.   Thus these birds are less common than they used to be in some Florida lakes.