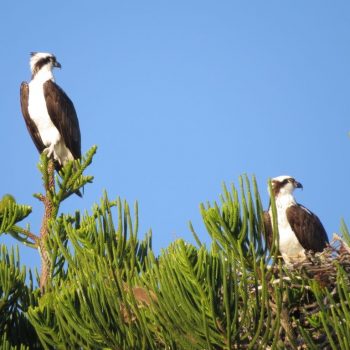 The tenacious female osprey on her nest

The present male and the third mate for this female since August, 2015

A wildlife saga of heart-rending proportions has unfolded on Manasota Key, FL, within the past two months. Ospreys have always nested in a tall Norfolk Island pine directly over our house for the 22 years we have owned it. We have become accustomed to their loud calls and followed their antics and falling fish bones with amusement and love. However on Jan.14 disaster struck when we found a severed osprey head on our front walkway! It turned out that a pair of great horned owls had attacked the ospreys to take over their nest and the male osprey was killed, dismembered and subsequently eaten by the owls. Great horns are fearsome predatory machines but they are entirely limited to nocturnal activities, whereas the ospreys are active only in daytime. Although the owls are slightly smaller than the ospreys (weights 3.1 vs 3.5 lbs; wingspans 44 inches vs 63 inches), they would seem to have an advantage in ferocity and their ability to kill many different and quite large prey species (ospreys eat only fish). But I have observed over the years that the ospreys nesting in our yard have shown a tenacity and fighting spirit that may be necessary for successful reproduction in a species whose nest and young are entirely exposed to the sky. Most birds nest in obscurity and depend on camouflage to protect their young. Once a much larger eagle tried to take the nest but it was fought off by the ospreys.

Our female osprey has also endured difficulties before. In August of 2015 her mate was electrocuted on a nearby power pole while eating a fish. Thus the killing of her second mate in January of 2016 was the second recent loss of her breeding partner. Yet within four days after the owl attack, she had attracted a third male which has apparently remained with her and successfully defended the nest site. I have concluded this since as of March 2, 2016, the pair have resumed normal breeding activities and the owls are rarely heard.